Barbara Lazaroff is primarily known for conception and execution of singularly unique restaurants.
Her innovative concepts and designs have received critical acclaim.
Her projects and business acumen have been featured in many magazines and books.

Barbara Lazaroff’s design work and insights into hospitality have been written about in the following books, amongst others. Chefs, Drugs and Rock & Roll transports readers back in time to witness the remarkable evolution of the American restaurant chef in the 1970s and ’80s. Taking a rare, coast-to-coast perspective, Andrew Friedman goes inside Chez Panisse and other Bay Area restaurants to show how the politically charged backdrop of Berkeley helped draw new talent to the profession; into the historically underrated community of Los Angeles chefs, including a young Wolfgang Puck and future stars such as Susan Feniger, Mary Sue Milliken, and Nancy Silverton; and into the clash of cultures…

See this article, When Wolfgang Puck’s Spago Was the Epicenter of L.A.’s Social Scene, for great insights into the story and times. Restaurants That Work: Case Studies of the Best in the Industry

About the book:
A complete rundown on how successful restaurateurs, teaming up with architects and designers, ply their craft. Martin E. Dorf presents 18 in-depth case studies of such successful restaurants as Scoozi, Union Square Cafe, and Chinois, along with personal interviews with their owners, chefs, architects, designers, kitchen planners, and consultants. 168 illustrations Chinois on Main is Barbara’s restaurant design featured in this book. The Restaurant: From Concept to Operation

The Restaurant: From Concept to Operation takes the reader from the initial idea to the grand opening. It features comprehensive, applications-based coverage of all aspects of developing, opening, and running a restaurant. This includes topics such as staffing, legal and regulatory concerns, cost control and general financing, marketing and promotion, equipment and design, the menu, sanitation, and concept. Let Us Eat Cake: Adventures in Food and Friendship

First published in 2002, next edition 2014
Regan Books, an imprint of Harper Collins Publishers

Every woman has poignant food memories: the times she licked the bowl when her mother baked a cake, or helped her grandmother make blintzes, tortillas, or Southern fried chicken. And how about the times… Super Chef: The Making of the Great Modern Restaurant Empires

Excerpt from page 46:
The second reason that Granita is important is because it symbolizes the importance of Barbara Lazaroff to the Puck-Lazaroff empire. Barbara has her detractors (as does Granita), but it would behoove men and women in the business to appreciate Barbara’s impact — the importance of a great partner, of a team — on the building of any business empire:
Like any of the great talent managers of Hollywood, fundamentally it has been Barbara all along who has understood Wolfgang best and who has helped to make him the phenomenon he is today. Whereas the humble village boy might have hesitated and cautiously undersold himself, Barbara constantly oversold him, confident that Wolf would always live up to her billing. And he did. The only photo-driven guidebook to the No. 1 vacation destination, The Complete Walt Disney World 2009 is a must-buy for anyone planning a trip to Walt Disney World. Filled with over 400 photographs and packed with more factual information than any other Disney guide, the colorful book includes in-depth information on attractions, activities, restaurants and resorts that you just cannot find anywhere else. RenWomen:
What Modern Renaissance Women Have to Teach Us About Living Rich Fulfilling Lives

Published in 2014
RenWomen is an exploration of some remarkable multi-talented, multi-faceted women working at the height of their abilities. Their lives and unique insights can inspire and guide women in how to reach higher and delve deeper in their own lives. Barbara is one of the 16 women profiled in the book, sharing her insights with readers. You’ll find her in chapter 12.

One reviewer on Amazon called this an “Important book.” All rated it well, saying things like “fountain of information” and “wonderful resource.”

Pictured here: Barbara Lazaroff with co-author Dale Griffiths Stamos. Barbara with Eva Hallar, also profiled in the book. Both photos were taken as the women socialized at Barbara’s. Recipes included are from Spago, Eureka, Chinois on Main, and Granita. Excerpt:
“We work with the same general concept, but our jobs are very different,” said Barbara.  “Wolfgang can change and revise the menu along the way, even after the restaurant opens. My interior has to maintain a contemporary look for at least ten years. I”m at the job site every day when we’re building, so every detail is exactly as I want it.. At Granita, I laid all the colored sea stones and shells into the bar top. I work right alongside the craftsmen and artisans. I’m as comfortable at my construction side as Wolf is in his kitchen.”

(You can read the page by clicking the page’s image. It’ll open in a new window. Just close that window when you’re done.) An illustrated celebration of romance details celebrity instances of love at first sight with anecdotes from such happy couples as Carly Simon and Jim Hart, Chris Evert and Andy Mill, and Mavis and Jay Leno.

Clicking this image brings up the story in new tab.
(426kb) Empowered Spaces
Architects & Designers at Home and at Work

Clicking this image brings up the feature in new tab.
(4.4mb)

The front of the Wolfgang Puck Café at Universal CityWalk was featured on the cover of this hardcover book. 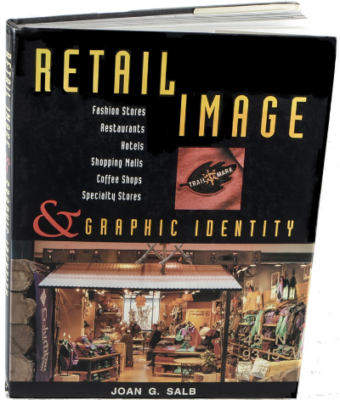 Recipes for Success From Leading Women and Premiere Chefs

Barbara, a Girl Scout in her NY youth,  not only contributed to this book, created as a fund-raiser for the Girl Scouts, but also hosted an event around it to help the Girl Scouts.,

Per its dedication: celebrates the accomplishments of today’s women in very diverse walks of life. The cookbook is meant to salute all of women’s contributions to our society, as well as serving as an inspiration to young women just now choosing their personal path in life.”